Mysore One Day Trip By Car

Mysore cabs offer to pick you up at any desired location in Mysore. You might stay at a hotel, your relative&#39;s place or you might just be arriving at Mysore, we can pick you up at the railway station or the bus stand. Our uniformed drivers would respectfully greet you and load your luggage into the car if any. Our clean cars would welcome you with a fresh sense of fragrance and we would start our onward journey.

Top Places To Visit In Mysore in One Day

We will take you and introduce you to Mysore.

Our first stop would be the Chamundeshwari Temple which is located 12 kilometers from the city. The temple is on a hill and the ride to the temple is breathtaking. You are first welcomed with the majestic Chamundi hill arch which begins your ride to the top. As you go up the hill, you can see the 5-star hotel Lalith Mahal to your left, as you ride further, you can see Mysore Rural.

At 1065ft above sea level, you can have a birds-eye view of the city of Mysore, and further away is where the temple is located at. People take photographs and selfies from this viewpoint. You can see the Mysore Palace, Lalith Mahal, St Philomena Church, Mysore Racecourse from the viewpoint. You need to walk a little to the temple and it takes about 45 minutes to see the Goddess. Our driver will next take you to the Bull temple. It is just further down Chamundeshwari temple. It is a monolithic structure and it is believed to grow day by day. A &quot; Mahamastakabhisheka” is a Hindu sacred ritual.

We will next go to the sand museum.

A private, recent museum inaugurated in 2014, it attracts a lot of tourist from all around the world. It is a one of a kind museum in India where sand is sculpted into 150 exhibits. Around 120 truckloads of sand are used to sculpt these artifacts. These sculptures depict the history and heritage of Mysore including the Wodeyars, the Maharajas of Mysore. The sculptor, M. N. Gowri is one of India&#39;s national sculptor and she took 4 months to complete the project and made it into quite a popular tourist spot. You spend around 30 minutes here.

Our next stop, Wax museum.

The wax museum is 4 kilometers from the heart of Mysore. It was carved by Mr. Bhaskar in 2010 as a tribute to the musicians of Mysore. There is wax sculpts of Late Sri Krishnadevaraya Wodeyar and Late Sri Srikantadatta Narasimharaja Wodeyar. Open from 9 AM to 7 PM, the museum charges Rs. 30 per entry for Indians.

After spending 30 minutes here, we head to our next stop, Karanji Lake.

Located at around 2 kilometers from the city center, a 90-acre lake flaunts its own charm. Its soothing voice gently calls out lovers and its tranquil environment captivates Mysoreans in all their senses. Left to it is the Mysore Zoo and the Chamundi Hill is in front of Karanji Lake. You can boat there for a small price and it has a butterfly park. A small road slides down a hillock which is a popular picnic spot. This lake was once used to draw drinking water during the time of the Wodeyars. It was then turned into this beautiful garden with a lake and is maintained by the Mysore Zoological Gardens &amp; they charge Rs. 10/- per person. You spend around 45 minutes in this place.

Our next stop would be the famous Mysore Zoo.

We would then stop for a short tea break and the driver will take you to a tea stall to tingle your taste buds with &#39; khadak masala chai&#39.

After the tea break, we head towards the world-famous Mysore Palace. The palace has a history of its own. There are 6 entrances to the palace of which 2 gates are public entrances. The Varaha gate and the Balarama gate, where tickets are issued, is where you enter. There is another gate, Karikaltotti gate, used by the Royal family. The architecture in this palace is mesmerizing and the vibe will take you back 200 years to the time of kingdom rule in India. The inside of the palace is decorated with gold, silver, and precious gems. There are 6 shrines in the temple premises as it was a habit of the rulers to build a small shrine to their Gods. 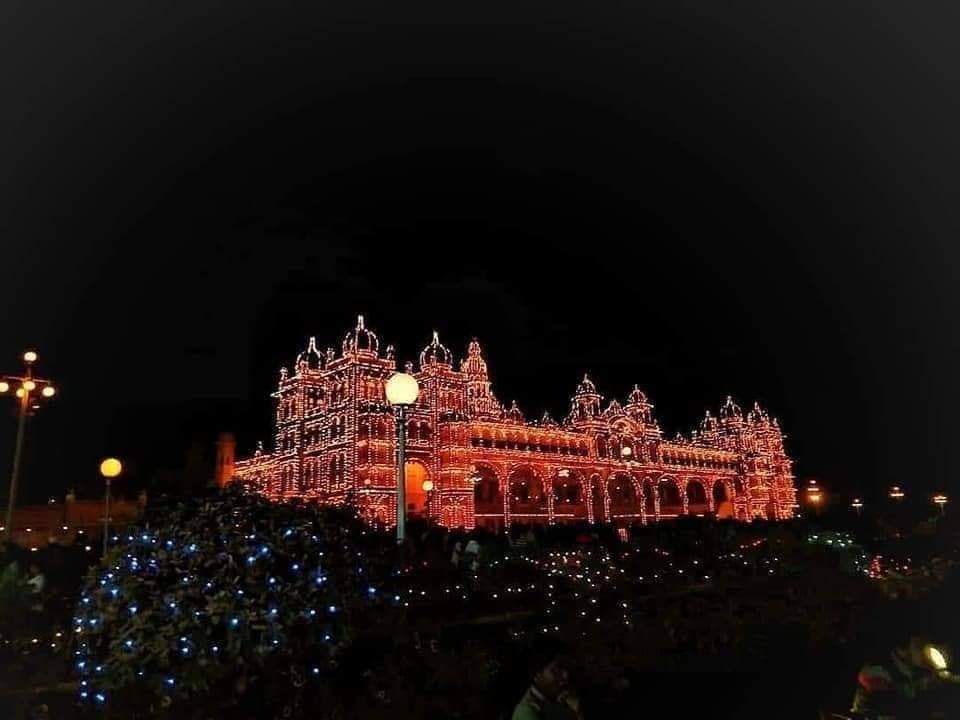 They are Shwetha Varaha Swamy Temple, Barravaswamy Temple, Trinyayaneshwaraswamy temple, Prasanna Krishnaswamy Temple, Kote Anjaneya, and Kote Ganapati temples. There is a mirror placed in Balarama Gate, where you see a panoramic view of the palace. People spend around 1 and an hour in the Palace.
We would then head out to lunch.

Mysore is famous for its lip-smacking cuisine. Mysore masala dosa, Mysore mallige Idli, Mysore Bonda, Mysore Pak are some of Mysore&#39;s delicacies. Vegetarian and non-vegetarian restaurants are of plenty in Mysore. Our drivers who are brought up in Mysore would know all about them. Ask them to suggest a name and check the restaurant for google reviews. If it fits your taste, just ask our driver and he will get you there in a snap. After lunch, we would continue our journey.

Saint Philomena church is located on Ashoka road. It was built in 1933 by the Late Sri Krishnaraja Wodeyar who was a staunch supporter of all religions. English, Kannada, and Tamil Mysoreans still gather in this church to this day for mass. Remember to leave your footwear while entering and photography is allowed. You will spend around half an hour here.

We then head towards Srirangapatna.

Our next stopover would be the Sriranganatha Swamy temple in Srirangapatna. The deity, from which the name of this island town is derived, is almost 800 years old. It was protected by Tippu Sultan, son of Haider Ali when he was the ruler of Mysore. During Haider Ali&#39;s rule, Srirangapatna was the capital of Mysore. There seems to be demolished palace in front of the temple and it is said to be Tippu Sultan&#39;s Palace. It was bombed down during the British rule. It was called the Lal Mahal. 30 minutes here and we then head to Daria Daulat Bagh.

Mysore and Srirangapatna are some of India’s most toured surroundings. One of the never-miss attraction in Srirangapatna is the Daria Daulat Bagh. It was the Summer Palace of Tippu Sultan. Constructed in 1784, most of its interiors are made from teakwood. History says that Tippu Sultan wanted somewhere to relax and since it is surrounded by the river Kaveri, this was the perfect spot to build a summer palace. You can see the gifts given to Tippu Sultan, weapons used to fight the British, and all sorts of historical belongings. Photography and videography are strictly prohibited on the premises.

After spending a solid hour we head to the tenth place in our itinerary, Ranganathittu Bird Sanctuary.

Heaven for ornithology enthusiasts, this sanctuary is home to many local and migratory birds including and not limited to kingfishers, egrets, and many more exotic species. It is about 68 acres in the area. Many birds flocked in great numbers here and it is situated next to the Kaveri river proved a prime advantage. The Birdman of India, Salim Ali, when he visited, requested the then ruler to declare this place as a sanctuary. It is located 128 kilometers from Bangalore and 19 kilometers from Mysore. Couples from Mysore choose this place for a romantic weekend getaway because of its mesmerizing environment. There is also a boating facility here. People spend around an hour here.

We then head to the last stop of our trip.

Located next to the famous Krishnarajasagara Dam, this Garden is a beauty to see in the evening. It is at 22 kilometers from Mysore and is estimated to have around 30000 to 40000 daily. Locals call them by many different names, Brindavan Garden, Kannabadi Katte being a few. Mysore, Mandya, Bangalore, and many districts in South Karnataka use water from this dam for daily use and irrigation purposes. Sir M Vishweshwaraya vision this dam after reviewing rainfall in the Kodagu district. He convinced the then Maharaja of Mysore and got his approval. It is a dam built not with cement but with limestone and mortar.

There is also a sound and light show in the evening. The best time to go to this garden is from 6 PM to 8 PM. This brings an end to our one-day trip to Mysore. Our drivers will drop you off at your preferred location after enquiring about supper.

Mysore cabs aim to provide the best service to our customers as we believe in your satisfaction. Hope you have a wonderful trip with Mysore cabs.

Do you have any questions about the Mysore one day tour package?

If you have any comments, suggestions, or questions, please do not hesitate to contact us. Our office staff will help you and answer all your questions.